Saturday LCCDad and I headed down to San Diego for the Rock n Roll Half Marathon (where I set a 9 min PR, running 2:02. Read the race recap!) We packed up early…

And hit the road. But not without stopping at Clementine for breakfast, obviously.

I started the carb loading early with a bagel and lox. This is probably one of my favorite breakfast items, after pancakes. And bacon. And breakfast potatoes.

I also had a latte, which I promptly spilled all over my white blouse. I have issues. We know this. 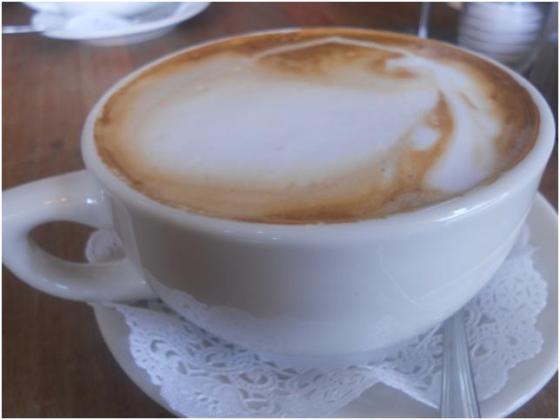 Because of the spilling incident we had to go back home but pretty soon we finally hit the 405 South.

You might remember that one of my goals for 2011 was to explore California. Signing up for races is really a great way to explore more parts of the state. I’ve never been further South (in CA) than Corona del Mar. Dad and I decided to take the 405 until Long Beach, cut over to the 1 and then after going through the beach towns in Orange County cutting back to the 5. The ride was long but the views were gorgeous. 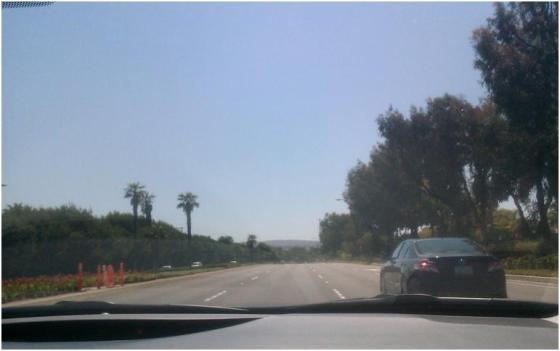 We stopped in Laguna Beach for Starbucks and a bathroom pit stop. I restrained myself from doing impressions from Laguna Beach: The Real Orange County. I loved the area near the beach! The vibe was perfect for this beach girl. 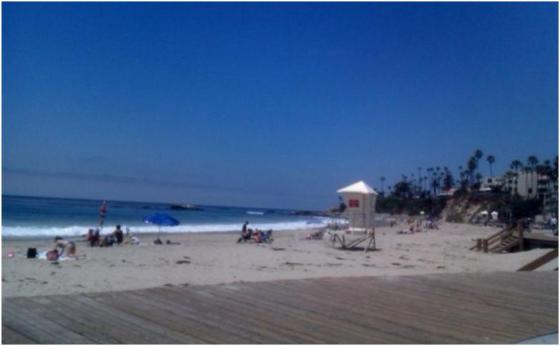 And then we hit the road again, but stayed within view of the beach.

Before we knew it we were in San Diego. The city is so beautiful! Now I know why so many of my classmates are working there this summer.

We stopped in at the expo which was a mad house! Dad was illegally parked so I ran in, grabbed my packet and ran out. There weren’t that many freebies but I did get a new technical tee: 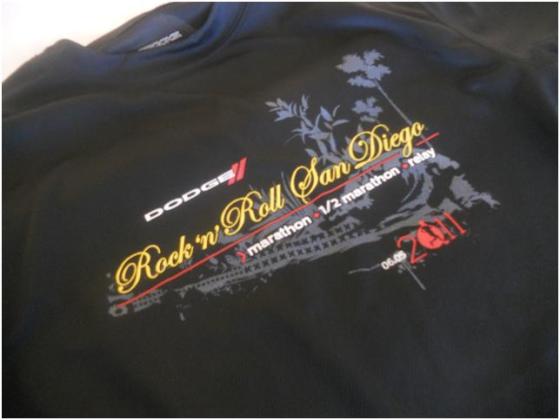 Not a huge fan of black running shirts (too hot) but I’m sure I will still manage to get plenty of wear out of it.

After getting out of the expo mess we drove somewhere much more relaxing: Coronado. Coronado is an island and to me, Coronado is like Martha’s Vineyard, Marco Island, and Palm Springs had a love child and placed it on the Pacific Ocean. I pretty much never wanted to leave. I was very fortunate to travel with my Dad, who wanted to stay at the Coronado Hotel. I am a very fortunate girl.

The Coronado was absolutely beautiful! 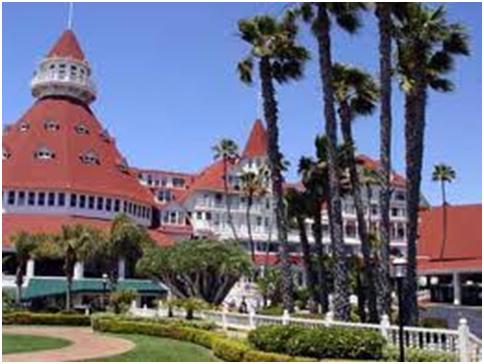 The outside of the hotel is pretty iconic and it sits on the beach. I am 100% a beach girl so it was pure bliss. The rooms were also very nice! I was lucky to have my own room on this trip.

LCCDad is making a cameo in that one! 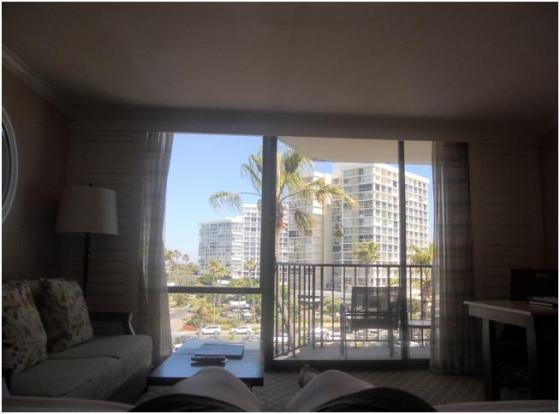 Laying on the bed. 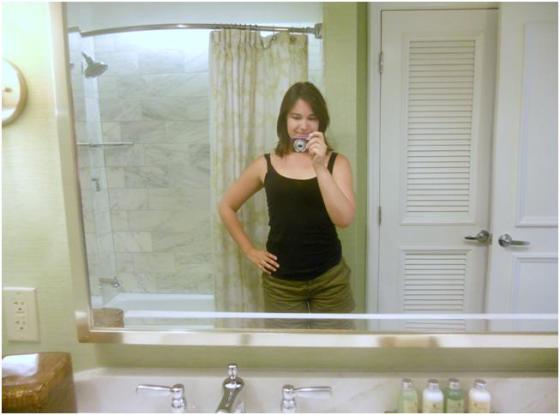 I was a happy camper.

This was the view!

The hotel itself is HUGE! There were two weddings that I saw taking place on various parts of the beach. This place is a well oiled machine!

The rest of the day consisted of frantic sun screen applying, pool hanging and a bananas pre race meal at the 1300 Ocean restaurant in the hotel which included a glass of malbec, burrata cheese with broccoli and a blood orange sauce, seared diver scallops, mac and cheese, and an orange crème brule. I didn’t photograph but it was a great pre race meal.

Overall between the drive south, exploring a new city by running through it, staying at the Coronado and setting an incredible PR it was a pretty special weekend. Special thanks need to be given to LCCDad for an epic trip and weekend.

The past two days have been crazy busy between work picking up and LCCDad not leaving town until this AM. I am still on cloud 9 due to my new PR. I tweeted this and this true:

I’m already debating returning to the scene of the crime in August for another half marathon. Sub 2:00 or BUST!

Anyone know of any good half marathons in So Cal this summer? Or alternatively what hotel have you always wanted to stay in? I seriously want to stay in the 7 star hotel in Dubai because I seriously love luxury (I know, you’re probably not surprised)

Yesterday was such a treat! I got to take a nice, much needed study break to socialize with other blogger at a cookie exchange. I definitely ODed but it was totally worth it! 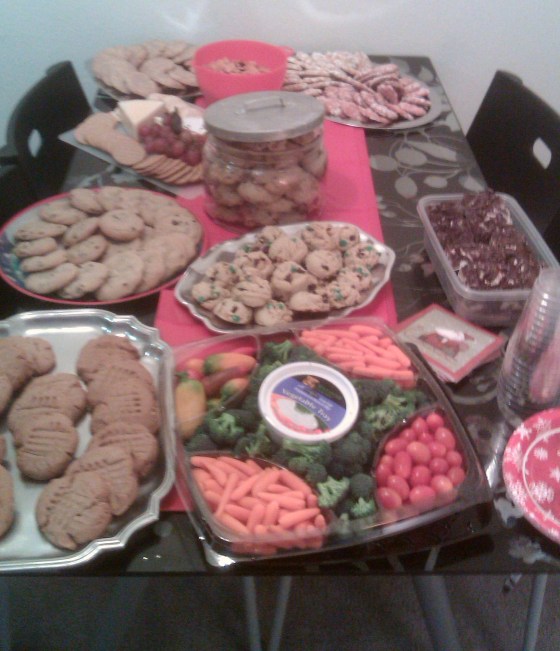 Why, yes. There were 6 people but we managed to produce 9 types of cookies. It’s how blogger roll. Also notice the lone cheese plate and veggie plate. You need something to chase the cookies with, right? I already know Kaitlin and Andy & Amanda. I also met Kaitlin’s roommate Mark and Melissa from Trying to Heal.

There was also peppermint bark by Melissa! All the cookies were amazing this might have been my favorite of the afternoon. 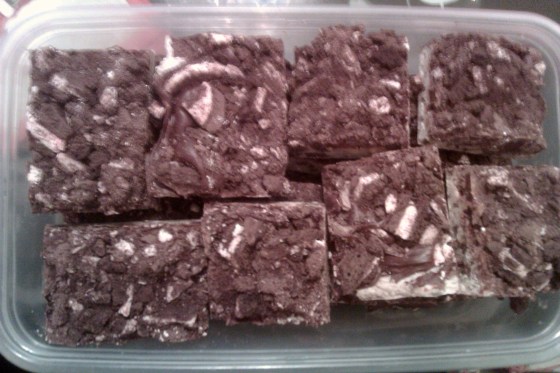 We ate cookies and chatted for three hours! Time flies when you’re having fun. It was great chatting with some awesome blogger (I guess now we’re friends) and eating!

Group pic! Thanks to Kaitlin for hosting and for letting me steal this photo!

Kaitlin’s house is totally decked out for the holidays and she has a real tree, named Douglass because he is a Douglass Fir obvi. This inspired me to get my tree out tonight! I had a 6 hour long final and after I was exhausted but I managed to find the energy to decorate.

I told Izzy that if she wore the Santa hat she could have a treat but she wasn’t interested so just stuck to setting up the tree. 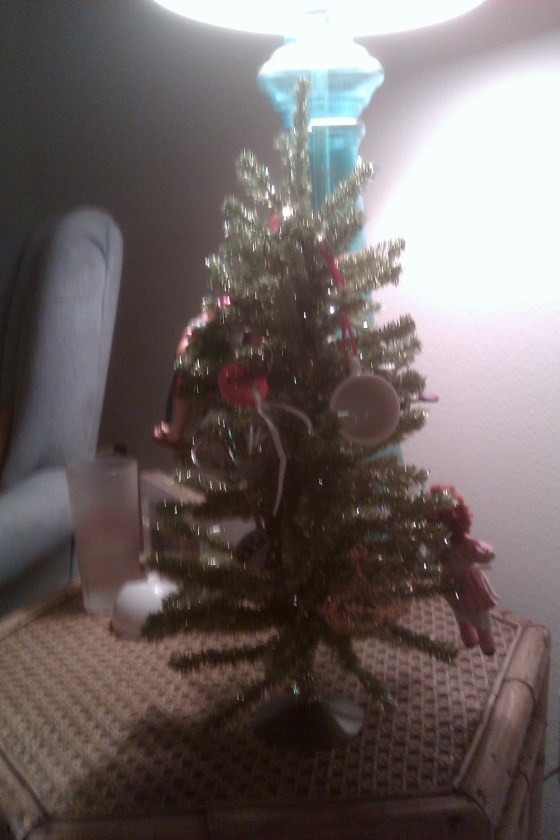 Why yes, my tree is silver and mini and fake. It doesn’t have a name yet but I am open to suggestions!

My favorite part of the tree are the ornaments. Every year growing up my Mom would give my brother and I an ornament as a gift that reflected what happened in our lives that year. Last year was my first year in my own apartment and my Mom sent me some. Last year I got surfing Santa.

So cute! My other favs are my Frango Mint ornament (you understand that if you’re from Chicago), Raggedy Ann ornament, Starbucks cup ornament, martini glass ornament, Clara from the Nutcracker, skating ornament, and my ornament with my Senior quote from high school on it. “The future belongs to those who believe in the beauty of their dreams”, in case you were curious.

I also hung a wreath and Christmasfied my dining table:

Don’t you just love the holidays?

And now an announcement!

As readers know, I recently ran the Malibu Half Marathon and loved it! Running is definitely a long term hobby for me and I have been thinking about what race I want to run next. Well, I am ready to announce, my next race will be the Rock n Roll Half Marathon in San Diego! The race is in early June and several other bloggers are planning on running. It should be a pretty fun time. Since Malibu I have averaged between 10 and 17 miles a week. I am very glad I don’t have training pressure during finals but I am excited to run in another race! After the holidays I will post a training plan. Since this will be my second half I will probably complete more long runs. I am very excited, and I hope you are too!

Finals taken: 1 (but it was the longest one! Wahoo!)