There really is nothing like a two hour lunch on a Friday with no class. In celebration of Restaurant Week my dining buddy Kelly and I decided to check out Ugo in Culver City. Dine LA is running some fantastic deals this week and next. We got a three course lunch today for $16! It doesn’t get much better than that!

Ugo occupies a nice big corner spot in downtown Culver City which is home to lots of adorable shops and restaurants. It was a beautiful LA day so we sat out on the patio and soaked in the sun.

Dining with Kelly is great for two reasons: 1) she loves food and is willing to try almost anything and 2) she isn’t shy about breaking into the bread basket. I went to yoga this AM and was starving by the time we sat down:

There is really only one drink for warm afternoon patio dining 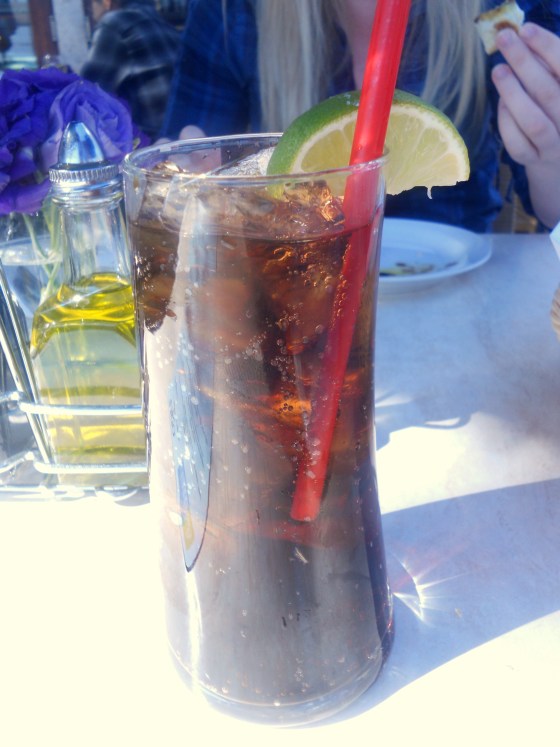 With the Dine LA menu you are able to choose an appetizer, entree and dessert off of a fixed menu. As usual we picked two appetizers, two entrees and two desserts to split. After we ordered we waited for a while and then suddenly as soon as the appetizers arrived so did the entrees. That was a little bit awkward, but I will say that overall the service was excellent. Our drinks were filled on time and the waiter was super attentive.

So many restaurants do

bruschetta you never know how good its going to be but I have to say this was some of the best I’ve had in a long time. The bread was crisp, the tomatoes were marinated, and the appetizer was garlicky. 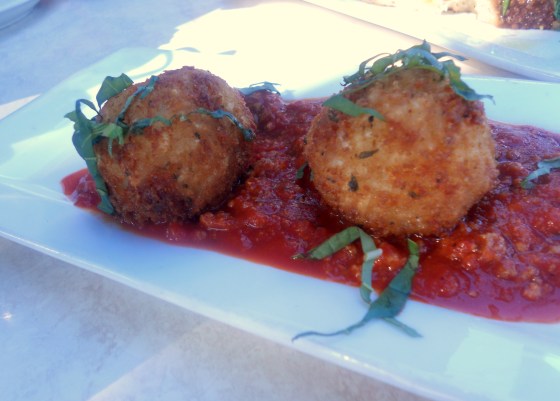 Arancini! We’ve been talking about these “rice balls” for almost a week in anticipation of this restaurant outing. Basically arancini is  arbario rice + mozzarella cheese + salami all lightly breaded and fried. You just can’t go wrong with that combination in my mind.

As you can see the whole dish was sitting on a meaty marinara sauce which we saved to dip our bread in!

The entrees weren’t as tasty as the appetizers but they were solid, especially for the Dine LA discounted price.

First we had penne del pollo with grilled chicken, leeks, sun dried tomato and a light tomato sauce. I love sun dried tomatoes so that aspect of the dish was good. This was a solid meal but it wasn’t the most spectacular pasta ever.

Sauteed chicken breast, Portobello mushrooms, roasted red peppers & fresh herbs in a white wine sauce with a touch of balsamic vinaigrette. Served with a side of spaghetti aglio e olio. While the pasta on this dish was plain, and quite honestly I could have done without it, the balsamic sauce was full flavored and totally to die for. I’m not a huge mushroom fan but when smothered in this sauce I gladly ate all of them.

The desserts at Ugo were epic! We ordered tiramisu and profiterole. 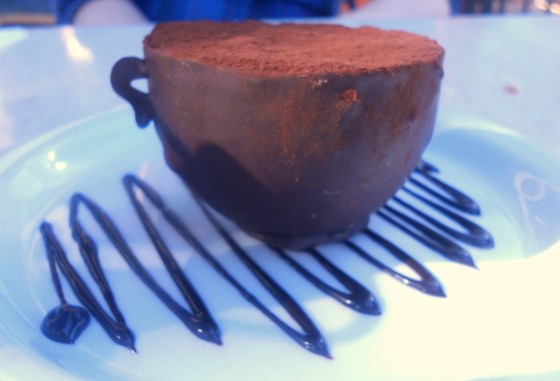 That’s right, it came in a chocolate cup! The tiramisu was smaller but one of the best I’ve had in a while. The powdered chocolate on top was a real, thick layer.

Basically it was a cream puff covered in chocolate. The chocolate layer was thick and the cream was heavy and thick, like good whipped cream. The women at the table next to us ordered this insane epic tall strawberry thing that also looked so good.

Clearly, the standouts at Ugo are the appetizers and the desserts. This was a great Dine LA deal and I would recommend Ugo to anyone who wants to spend an afternoon in Culver City or to anyone who wants a really special dessert. I would definitely recommend going to Ugo at a time when you can sit on the patio. It was a delightful two hour lunch!

** Tomorrow the LA protest in solidarity with Egypt is happening at noon at the Federal Building if you are interested. At the very least read this and educate yourself about what is going on in Egypt. This is a critical foreign policy issue. I try not to be political on the blog but this is a hugely important issue and apathy is unacceptable!  **

7 thoughts on “out to lunch”