Despite my sore throat I still managed to participate in the LA Cancer Challenge 5k on Sunday morning. Long time runners might remember that I ran the 10k last year. You can read my recap here. Confession: I was an ill prepared blogger and took limited pictures.

I run this race every year in honor of my friend Shahrin and her mom Lily. Lily died last year after a 16 month battle with pancreatic cancer. Every year Shahrin organizes a group of my friends to walk in Boston. I wish I could participate in that walk, but obviously it’s geographically impossible. So instead I participate in the LA Cancer Challenge which benefits the Hershberg Institute. You might remember Shahrin from when I went to her wedding last summer in Boston.

I love this race. It takes place on the VA grounds and because there are large teams of participants there is a family feel. People bring their dogs, dress up in costumes, and have shirts and signs about loved one who had pancreatic cancer. The race is well organized and contained in the VA grounds.

I also had my friend Danielle joining me. It was Danielle’s first organized race ever! Her Grandpa died of pancreatic cancer so it’s a cause close to her heart too.

Danielle and I on Halloween, in the spirit of the weekend, vampire and ballerina.

I woke up with a sore throat and I’ve only run 3 times since my marathon so I had planned to take it easy and run with Danielle. But at the last second Danielle said it was OK if I ran fast on my own and that’s what I did. What can I say? Races bring it out in me. The course was the same as the year before so I knew what to expect. It felt hillier than last year, probably because I moved and my new running routes have fewer hills. I felt great for the first mile and it was downhill from there.

I’ve been noticing that recently I can run for long distances slowly but I can’t run quickly. Especially with a sore throat I felt challenged. My legs never felt tired despite the hills but I did take several walk breaks to catch my breath. This is not my favorite thing to have to do but the fact is that I haven’t trained for speed and I was sick. It happens and I will bounce back. Plus I ran a marathon and it was worth it.

I managed to still finish in 28:50 and a 9:18 pace. Not bad by ANY means but I ran a half marathon with a faster pace. I guess it just highlights what I know I need to work on.

But the best news? I fifth out of 75 in my age division! Woo hoo! I can deal with that.

Overall I love this race and I hope to do it every year where I live in LA. The event is well run and I really love the community feel.

Unfortunately I was not feeling well before the race and the combination of a race plus yoga exacerbated my cold into a fever! I actually took Monday off of school and am starting to feel better finally.

How was your Halloween weekend?

Today I learned a couple of lessons about preparing for races and I set a new 5k PR.

Backing up. I woke up this morning at 7 am which was a nice wake up call for a race! Normally I’m up at 5 or 6 am on race morning. I was thankful for the extra 2 hours. I was thirsty when I woke up. I went out last night and had a drink. Normally that wouldn’t be a problem (I mean, I had wine the night before my half!)  but I woke up so thirsty. I downed a glass of water and felt full so I stopped drinking water, had peanut butter toast and a enough coffee to wake myself up (muhahahaha, I’m not telling you how much that is).

Lesson #1: Make sure you are properly hydrated. Instead of that fantastic St. Germain cocktail, order a water. Or chase it with several glasses of water. Normally for every glass of booze I order I get at least one glass of water. This didn’t happen last night.

I got in the car and drove to Santa Monica with plenty of time. I wanted to save parking money and warm up my legs so I parked at Santa Monica Place and walked the mile and a half. I had plenty of time and felt totally relaxed. I brought a bottle of water and I meant to drink it but I forgot that it was in my bag. I got to the start line and started to look for the bag drop.

Lesson #2: Check to make sure there is a bag drop.

Yep. There wasn’t one. This lead to panic. The race organizer just looked at me blankly when I asked what I should do. Not helpful. I was also trying to find Kaitlin and Amanda and I just wasn’t seeing them which frazzled me. Then I figured out that I could stash my bag with the Primetime Timing people. Thank god. Remember that if you’re ever in a race day bind.

I finally caught up with Kaitlin. I felt all thrown off by the bag drama. I didn’t have a second snack and I didn’t have the water I brought. Yep. I only had one glass of water before the race. Poor choice.

Because I really wanted to PR I went towards the front of the line. I was next to a 60 year old man in swimming shorts, no top, and he had an Ironman tattoo. He looked hardcore. It was a lot for my mind to process in the accelerated state it was in.

The gun went off and the race started. The course went into Venice and back to Santa Monica on the board walk. The marine layer was pretty thick today but the sun peaked through. I cruised for the first mile and a half. My feet and legs felt awesome on the mostly flat course (after Malibu its going to take some serious hills to throw me). Since I wanted to PR I pushed myself for the first mile and a half. Around mile 2 the course turned back towards Santa Monica and we ran back along the boardwalk.

If you know anything about Venice, you know its a great place for people watching, which kept me entertained along the boardwalk. I needed it! After mile two I started to feel tired. I was super thirsty and hungry (probably because I was thirsty) and I felt winded. I was kicking myself for freaking out before and forgetting to hydrate. I walked through a water station.

During the last mile, while watching the surfers, people pumping iron at muscle beach, randoms eating breakfast, and smelling the smoke pouring out of the “medical dispensary” (for real, you can just tell you’re in Venice by the smell) I thought about how hard a 5k is. Don’t get me wrong, I believe that everyone can train for and run a 5k but it is much different than the distance running I’ve been doing. During a 5k I’m compelled to run as fast as possible unlike the half where the goal was just to finish. I have major respect for anyone who runs a 5k.

Before I knew I saw the blessed mile 3 sign and my reflective moment ended. I sprinted to the finish. I finished the 5k in 25:25, with an average pace of 8:10 setting a new PR!

Part of me really wanted to break 25 min. but, overall, I am very happy with my time. After grabbing water I went back and watched Kaitlin and Amanda finish their races strong! It was Kaitlin’s birthday and she wrote “its my birthday” on her shirt. Someone even sang to her while she was running. Best idea ever, kicking off your birthday with a race. There were some adorable dogs running including a dog wearing antlers, a golden, and another probably 60 lb dog being carried that last .1 mile by their owner!

After the race we headed back to Santa Monica for breakfast. I had steel cut oats. 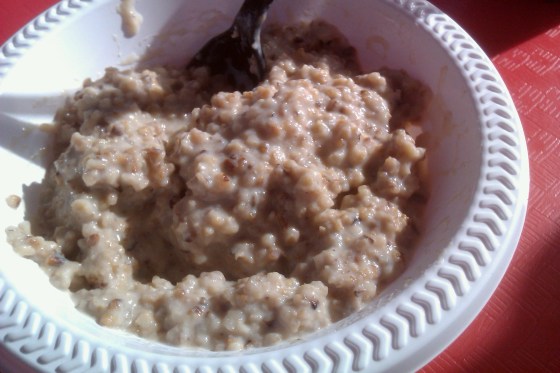 There might have been some hash browns and an iced coffee too. And by might, I mean there were.

After breakfast I said goodbye to everyone and headed home. My foot felt a little twinge so I iced it on a bottle of gin and took it easy.

Here is the playlist that I listened to (I finished during the Peas).

Overall my 5th race was great! It felt great to run and to PR. I am definitely hooked on racing and cannot wait to run the next one.