I have a declaration to make: I had the most delicious New Years Eve, ever. 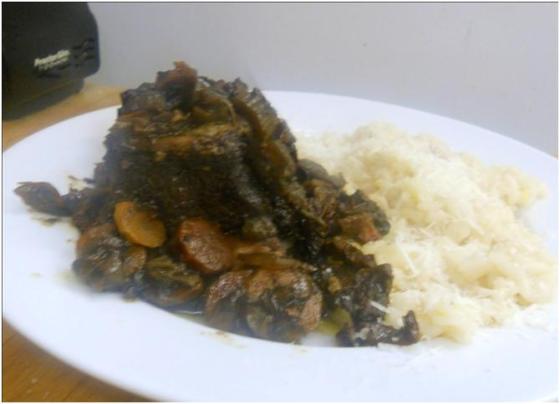 As I said in my last post, rather than have a big to-do for New Years Eve I decided to make an extra special meal to celebrate. I had just the meal in mind: Short ribs and prosecco risotto

I love red meat but I rarely cook it for myself due to a combination of cost and laziness. However, I received the Santa Monica Farmer’s Market Cookbook for Christmas and I instantly knew that I needed to make an exception for these short ribs. I love short ribs and the recipe looked delicious (and it had “red wine” in the title) so I figured I should use the special occasion to give it a try. I also was anxious to cook out of this cookbook specifically. I frequent the Santa Monica Farmer’s Market. So far the book is great. I really like how it breaks down the recipe by season and I enjoyed reading the history of the market. Like with my blogging about the Flour Cookbook, I love this book and want to encourage you to buy it (especially if you frequent any farmer’s market). Thus, I will not be posting the short ribs recipe. I will post the adapted prosecco risotto recipe I used through! 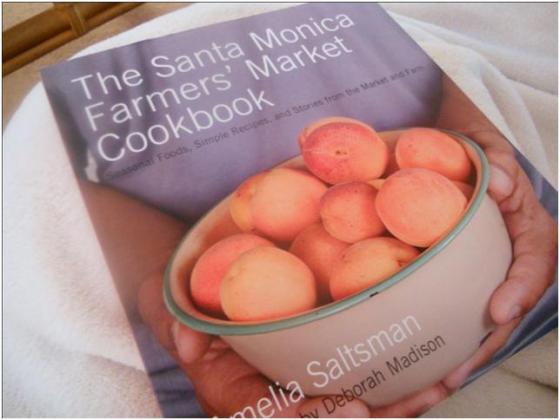 Short ribs take forever and a day to cook so I started on the short ribs first. When I cook something big like this I like to prep all my ingredients first so I’m not madly chopping carrots and burning things. 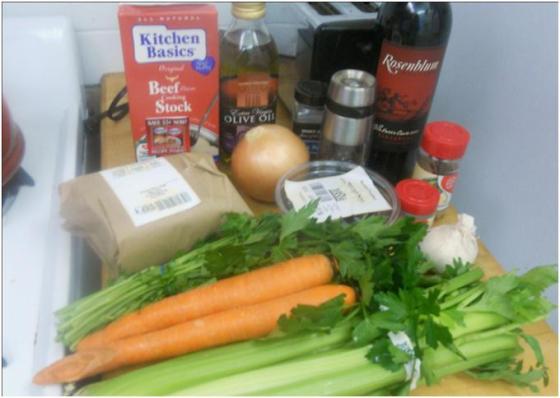 It took an army. 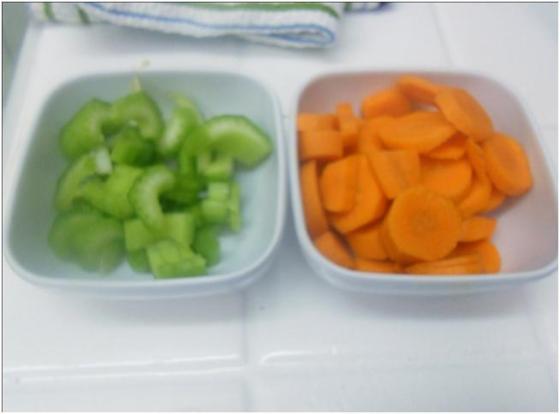 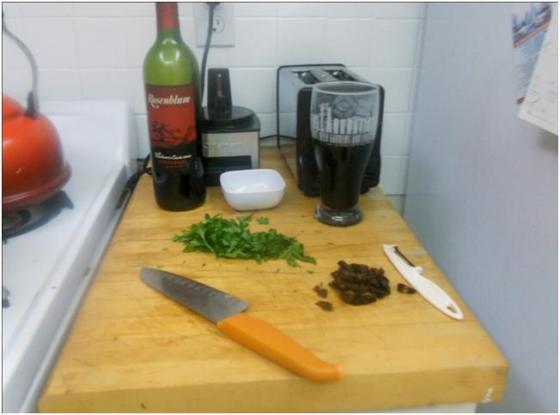 Due to its spiciness I purchased Zinfendel for the red wine. I rarely buy Zinfendel but I really liked it! I will have to purchase it more. 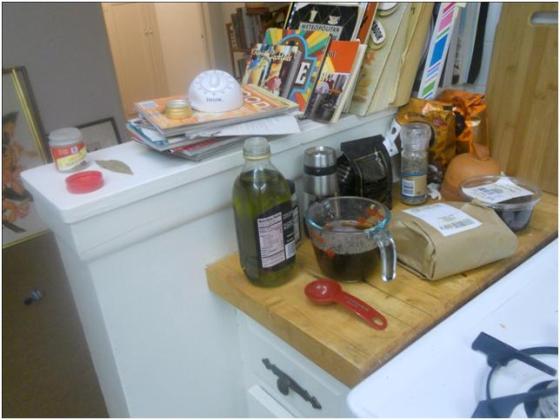 It may look disorganized but it really helped me stay organized.

I started by taking the ribs, patting them dry and seasoning them with salt and pepper. 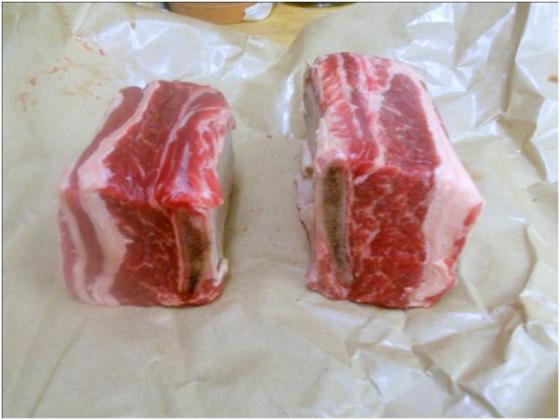 Look at that meat! Sorry veggies and vegans. I could never be/date one of you. I love me some meat.

Then I cooked the meat in the pan, browning on all sides. 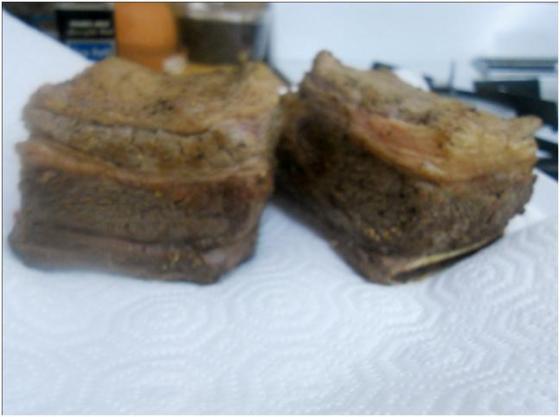 After the meat had been browned I wiped the pan and threw in a bunch of spices (bay leaf, marjoram, and parsley), onion, carrots, celery and oil.

Let it cook. This is the last time it looks truly pretty. 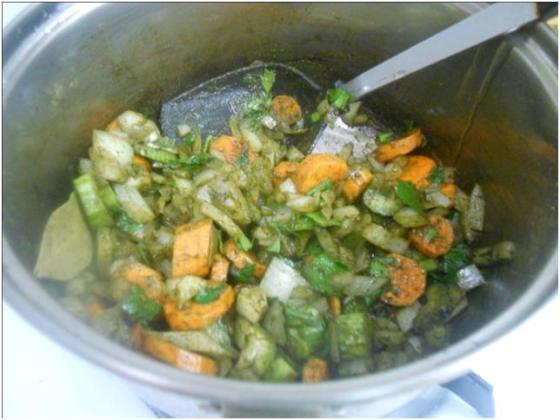 Once the veggies had softened I added the red wine to the mix. 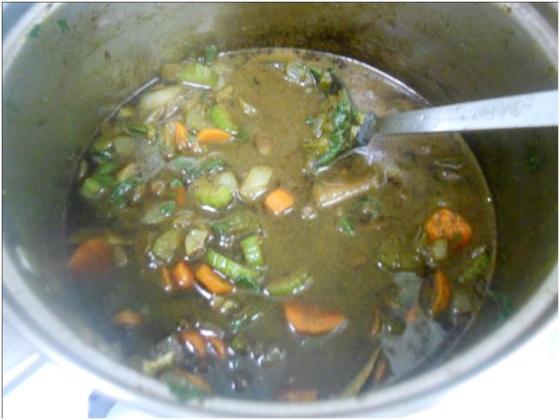 I let it cook until the wine had reduced. Then I placed the short ribs in and made sure that 1/2 the short rib was covered with liquid. To do this I added a little beef stock. 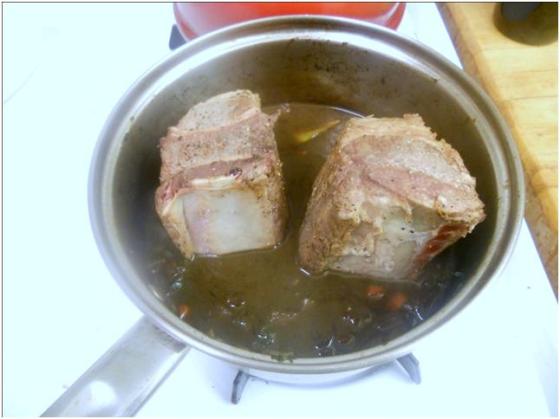 Then I covered the pot and let it simmer for 2 hours.

It was the longest 2 hours of my life! Not only did my apartment smell like red wine but I was starting to get hungry. I managed to distract myself for the first hour by drinking some of the leftover Zin and watching a replay of an old Jersey Shore. In all the excitement of vacation I totally forgot that my favorites are returning to Seaside Heights this week. That’s FTW.

After an hour I went back to the kitchen to check on the status of the ribs and flip them. I also added a touch more red wine and beef stock. I let them cook for another hour after flipping. After cooking for another hour the short ribs should be falling off the bone (yum). I removed the meat from the pot, removed the bay leaf from the pot and poured some of the red wine over the short rib. 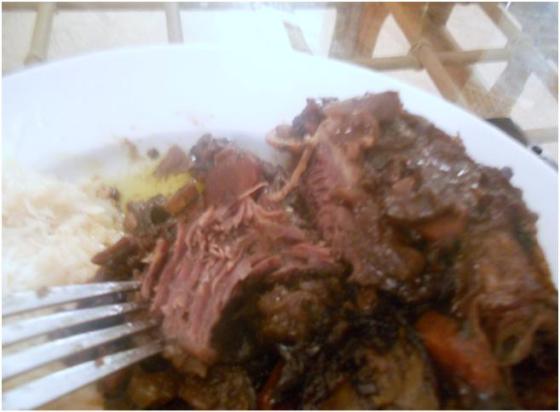 Back to business: In the final hour of cooking the short rib I turned my attention to the prosecco risotto.

I have been dying to try this recipe for months. Need proof? 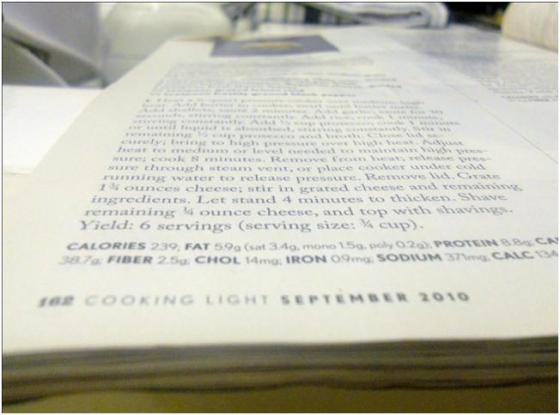 Why yes, I adapted it from September 2010’s Cooking Light. Hey, at least I finally got around to it.

I could tell you a story about why I wanted to make this but let’s just be honest with each other: it has prosecco in the title. It was going to be made. I actually used the recipe as a rough basis because it call for cooking the rice in a pressure cooker which I don’t own.

I mean really, how can anything with prosecco ever be bad? #BarefootContessaMoment 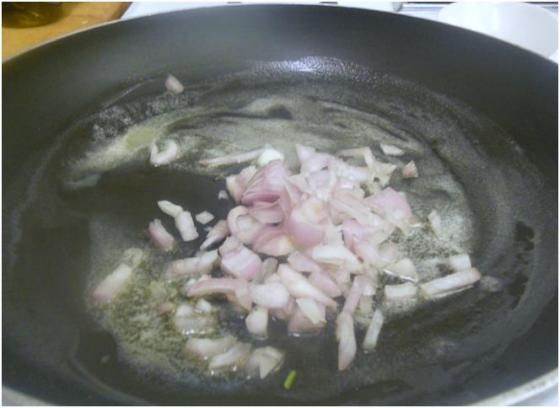 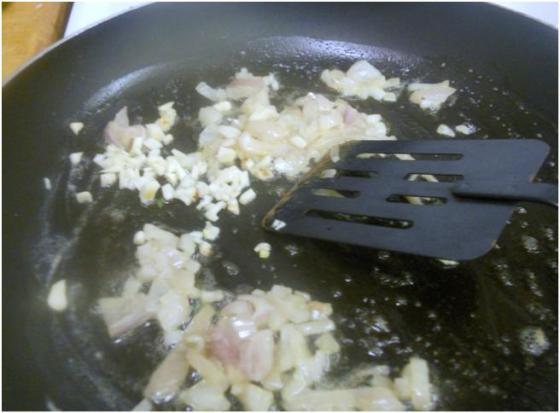 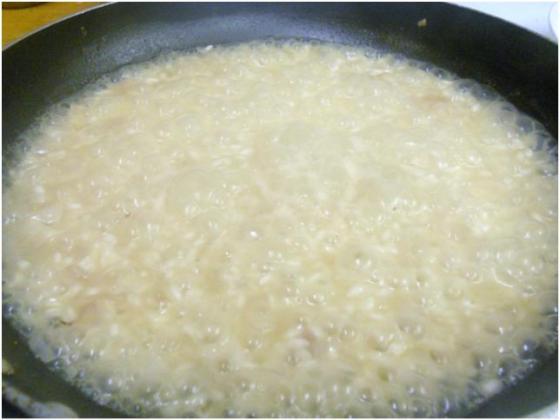 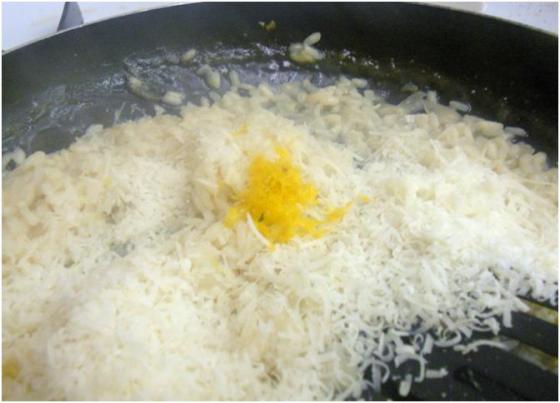 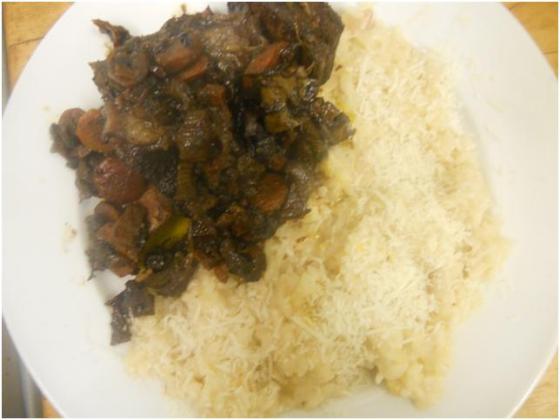 Excuse me while I face plant into this meal. 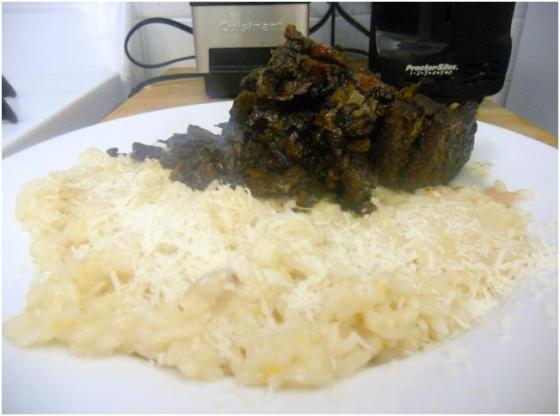 This was the best dinner ever. It took a lot of time and there were many steps and expensive ingredients but it was so worth it. The meat was falling off the bone and the Zinfendel provided a delicious punch with the carrots and celery. I could not stop myself from eating the risotto. I actually ate all the leftovers I had on New Year’s night. They were creamy like regular risotto but the prosecco added something extra to the flavor. I will be making this risotto again. I would bet soon. Plus, who doesn’t want prosecco in the house? I don’t think that this meal is something I would make on a regular basis but it would be a great thing to make if you had someone to impress. 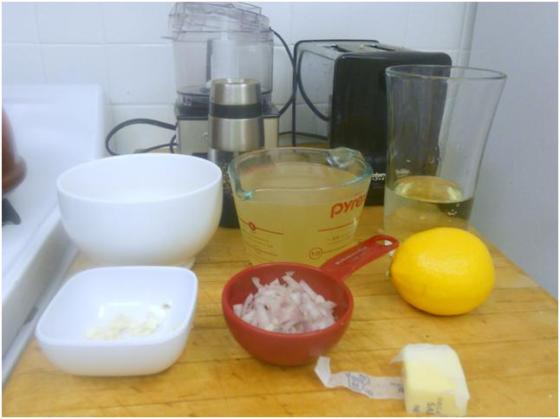 1/2 cup prosecco, plus more for cooking

Heat a large sauté pan to medium heat. Add butter and melt. Once butter has melted add the chopped shallots to the pan and cook until softened. Then add the garlic for 1 min, stir until fragrant. Add the rice to the pan. Stir for 1 min and then add the 1/2 cup prosecco. Again, stir constantly until the prosecco is absorbed. This should take a few mins. Then add 1/2 the chicken broth to the pan. Turn up the heat and stir consistently. Watch the rice until the liquid is absorbed. Then add the second half of the broth and more prosecco. I eyeballed it, likely it was another 1/2 cup. Adding a little more wouldn’t be the worst thing ever because it’s good for risotto to have some extra liquid. Again, continue stirring until the liquid is almost completely absorbed. Remove from heat and add grated cheese and zest. Mix well and serve with some additional cheese grated on top.

Of course I topped the night off with a Morning After Mimosa cupcake from Susie Cakes. 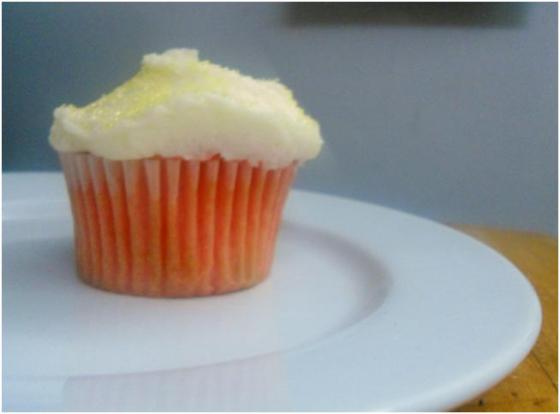