Today was the day. It was time for the longest run on my training plan (not to mention my longest run ever!)

But first: some inspiration by Nike.

Pre run I had the GREATEST GRILLED CHEESE OF ALL TIME! It included shallots, cheese, and tomato and was cooked on my fantastic new grill plan.

So good. Maybe not the best running fuel of all time but eh why not?

Then I headed out, settling into a nice, natural pace. I didn’t time myself because I didn’t want to be thinking “oh I need to go faster” at all. Not timing myself takes the pressure off the already pressured situation of running a new distance. I made it all the way to the ocean and along the coast. The weather was overcast but it was such a personal accomplishment to run all the way to the ocean that I didn’t mind. At mile 6 I walked for 5 blocks and had three shot blocks.  I wish I brought more because around mile 9 I was pretty hungry.

At mile 10 I ran into two guys who were training for the LA Marathon. They were running 8 miles. I kept just behind them for the final two miles which kinda made me feel like a rock star. And before I knew it, I was sprinting across the final intersection and it was all over! I went 12.1 miles overall and I really believe I am going to be able to finish the half. Nothing is more empowering than running a long distance. Nothing. 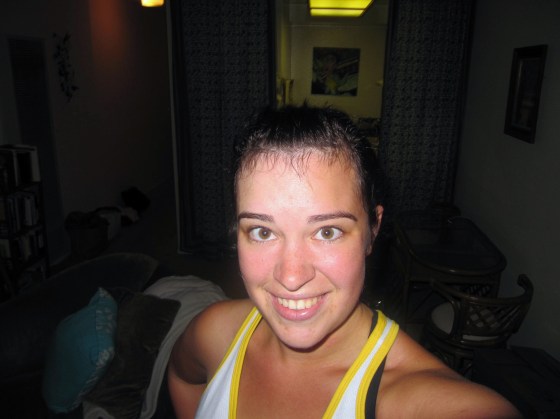 Post run I immediately ate a new to me flavor of larabar.

As much as I love the wall of Larabars at Whole Foods, I normally get my larabars at Trader Joe’s because they are slightly less expensive and lets admit it… I need to avoid Whole Foods because otherwise I will go from poor grad student to broke grad student.

Then I ate pizza, which didn’t make the blog BUT it was on white crust instead of whole wheat, because I live on the edge.

Now I am finishing up my calorie replenishing bonanza with Tina’s Sweet Potato Cookies, sent to me by Carolyn via our baking exchange. They are amazing, and also all gone.

Yum! I am off to watch Desperate Housewives. Am I the only person still watching it? Hope you all had an awesome weekend!