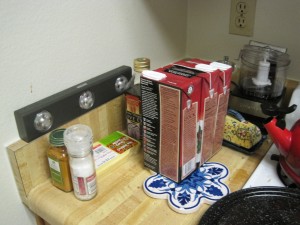 The beginning of an amazing meal

At the request of the family I hosted a dinner on Saturday Night. Kal and Chrissy were stuck all day at Moot Court so I spent the afternoon cooking to celebrate the end of their suffering. When having people over you can always depend on the Barefoot Contessa. I decided to make her cheddar corn chowder.

Before everyone came over I measured out all the ingredients. That meant cutting up 6 cups of yellow onions. Yes, 6 cups. I was on the phone with Carolyn practically crying because of the smell. I also measured out the seasonings, cut up bacon, chopped potatoes, measured cream and grated cheese. It was great because when everyone came over all I had to do was start cooking. The other great thing about this soup is that it only takes 45 mins once everything is prepped. It was done quickly and gave everyone enough time to have a glass of wine before dinner. 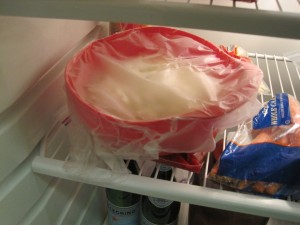 the onions, after they made my eyes water

First I cooked the bacon in the olive oil until crispy. Once it was done cooking I removed the bacon from the pot and kept the grease in. Then I added all the onions to the pot and the butter. 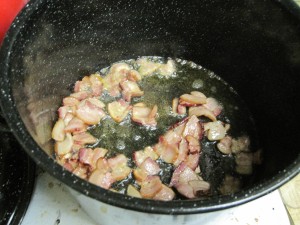 Once the onions were translucent I put in flour, and the seasonings. I stirred for three mins. Then I added the chicken stock and potatoes. Oddly, Trader Joe’s did not have chicken stock. I had to go to whole foods for 12 cups of chicken stock.

After the chicken stock was brought to a boil I reduced the heat and let it simmer for 15 mins before adding the frozen corn. I choose to use frozen corn 1) because I didn’t want to deal with removing corn from the cob and 2) because is there really any good corn in January? Even in California I decided it was better to use frozen.

After adding the corn I put in the cheese and the half and half and topped it off with more salt and pepper. 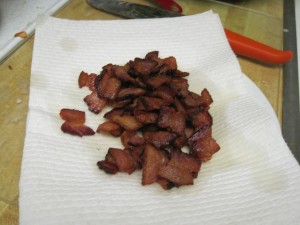 My guests were able to use the bacon as a topping.

Overall, the meal was a hit. Eric made this amazing beef that he marinated, seared and baked. Then he made a tomato, onion, mushroom, and cucumber (?) topping. It was so good!

For desert I made cookies. I was able to make the dough earlier in the day. I used a basic cookie recipe off the back of the chocolate chip bag but I stepped it up by browning the butter and adding Saigon Cinnamon. Adding cinnamon to the cookie gives it a something extra special. I believe one of my guests said, “I am so never eating store bought again”. Thanks to Carolyn for the cinnamon and browned butter idea!

Then we watched “The O.C.” and marveled at Sandy Cohen’s eyebrows. We also watched “The Pregnancy Pact” and “Jersey Shore”. Clearly a stellar night.

Try it for yourself: