How’s the week going? Mine’s been busy but good! My meals have been dull (with the exception of last night, which I will get to in my next post) but there are three “little” things that have been exciting this week. Let’s get to it!

1. Monday: Van’s Belgium Waffles, and what I’ve been doing when not blogging 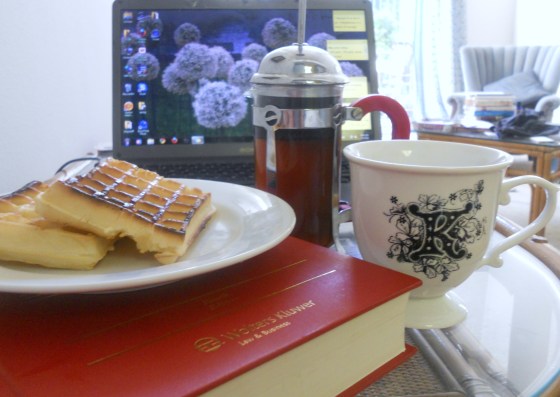 Spoiler alert: They aren’t as good as the regular waffles. WF was out of my normal waffles and I didn’t want to eat flax. I know, revoke my healthy living blogger card. I will say that it was nice to mix up my mornings a bit but I can’t wait to get my normal waffles back! Also note the legal book and the lap top. No more nice, quiet mornings for me. Instead I’m focusing on school work. How much longer until May 12th?

My favorite coffee house drink of all time is a Venti Black Iced Tea with no sweetener. This is well documented as I’ve had a twice a day habit since high school. Yes. I was that girl, running into advisory with Starbucks. It’s ok because I’m not the only person in my family with a twice a day Starbucks habit. The employees at “my Starbucks” in my parent’s town still know my name, and I haven’t lived there for 6 years. Yesterday was they debuted the new Starbucks logo. What do you think of it? I kinda like it. Plus, now Starbucks has cake pops. That’s a winning moment for everybody, right? Fun fact: the first Starbucks in Chicago opened the same week I was born. Coincidence? I think not. 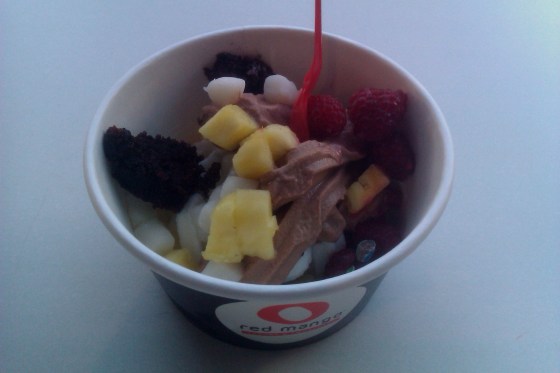 Can I take a moment to shout out the Cali weather today? It was 80 and sunny! It felt like August. I went on a 4 mile run in the mid morning. I am so not a morning runner. My legs hated me the entire time and it was super hot, especially in the sun. I even ran with a water bottle and the heat was still almost too much for me. On the plus side, after wards I felt like I’d covered 8 miles instead of 4. On the way home from school I decided to treat myself with a little red mango… Key Lime Pie and Dark Chocolate (random, I know, just roll with it) and various toppings. It was so nice as an after school treat!

That’s just a quick taste of what I’ve been up to the past few days. I have a special update coming about Fat Tuesday later. Let’s just say it involved some dellllicous Cajun treats!

What is your go to coffee house drink?