Greetings and happy Sunday! How has your weekend been? Mine’s been busy. I realize that I’ve been a lazy blogger recently. I even got called out on it on Friday night. What can I say? It’s been a busy week. Sometimes law school can feel a little life and death and I like that blogging isn’t. I missed blogging during my mini break but I feel way better than I did a week ago so let’s count this as my return to blogging! I think after my favorite Sunday yoga class tonight I will be back at it and totally WINNING!

Today had been errand filled. I had a law journal meeting at Loyola Law School. Unlike most law journals, the public interest journal is a collaboration between several LA area law schools which is totally awesome. The meetings often take place on Sundays on the East Side. In order to get excited about going I normally treat myself to breakfast on my way east.

Like remember when I went to Kings Road Cafe? That was before a law journal meeting. Today I decided to check out Paper or Plastik which I’ve wanted to check out since Lynn first blogged about it.

What an awesome cafe/coffee shop! I got there around 9:30 and there were plenty of places to sit. The baristas were really nice. Sometimes in good coffee places you expect the baristas to be pretentious but that is not the case at Paper and Plastik! 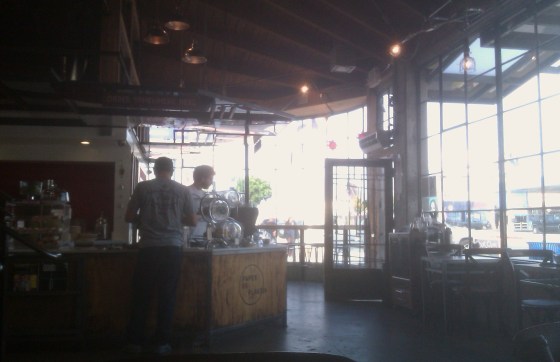 I ordered a large low fat iced latte (my “I need energy and iced tea isn’t going to cut it” drink) and a croissant. They have three special sandwiches for the day (goat cheese and preserves, um yes!) and they also had assorted pastries for another cafe. I decided to splurge on a ham and cheese croissant (I have had one in over a year). How was it? Tasty, flaky, buttery and delicious. 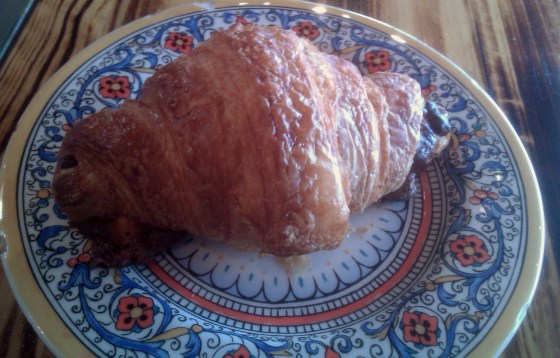 The food was up quick and I had no problem finding a place to camp out with my reading. 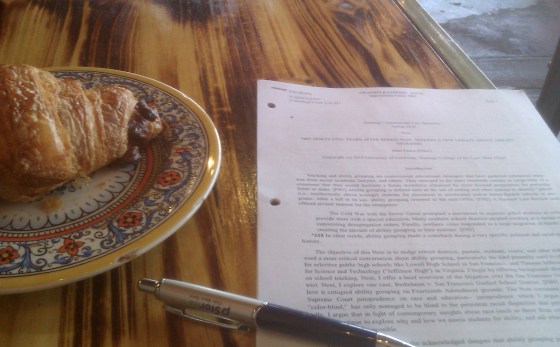 I spent about 45 mins eating and reading and the cafe was busy but not overcrowded. I wonder if it’s like this on weekdays because I can see it being an awesome finals studying place.

I also wrote a cramped outline for my paper. It looks like something someone would be clutching while getting admitted to an asylum but it’s some serious progress. I haven’t written a paper that isn’t a legal memo in almost two years. It’s nice to see I’ve still “got it”.

Also, Kaitlin posted earlier today about handwriting. This isn’t a cute list of questions but now you can see how terrible my handwriting actually is! 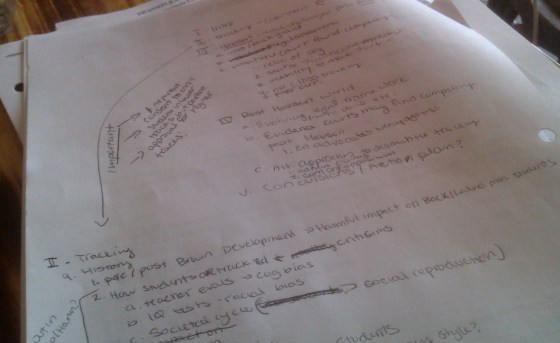 I’m actually pretty terrible at spelling but I also like to think that I’m living proof that you don’t have a be good at spelling to be a successful person!

Now I have to take care of laundry, homework, dinner and yoga! Cannot wait to go back to my Sunday yoga class! It’s been three weeks since I’ve been able to make it to Sunday yoga and man do I need it!

Are you good at spelling? Spelling was always my least favorite subject in elementary school. I blame it on dyslexia.

4 thoughts on “Paper or Plastik”