I have been very good this semester at bringing my lunch to school (or eating at home). It’s not that hard because there are very few appealing options at school (Carl’s Jr? No thanks!) Today I had a lot of reading to do in the morning and I didn’t have time to make lunch. After class I decided to wander over to the area where the food trucks congregate and boy am I glad I did.

Look what I found: 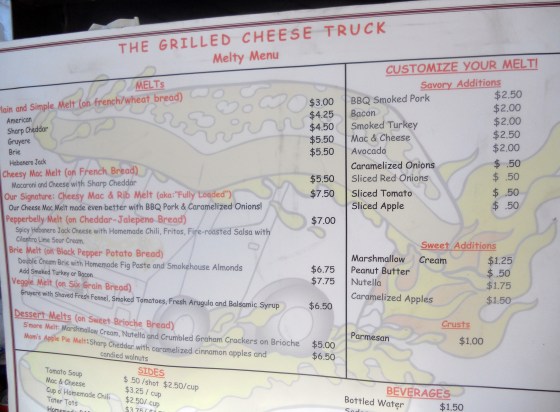 While I was enticed by the brie and fig melt (!) I decided to go with the signature sandwich: the mac and cheese melt with rib meat and caramelized onions.

I sipped on this while I waited:

And then I waited and waited. It actually wasn’t that bad, thanks to my smart phone.But finally it was ready…

This sandwich is what it sounds like: cheesy mac and cheese with rib meat. It was pretty tasty but very heavy. Not only was the mac and cheese cheesy, but there was additional cheese. So much cheese. I’m not complaining, we all know that I love cheese. You’d think that eating a sandwich with pasta in it would be weird but the mac was very soft, it didn’t seem like I was eating pasta at all. The rib meat was shredded and had a sauce which was slightly tangy. It didn’t over power the cheese but it cut the super cheesiness. 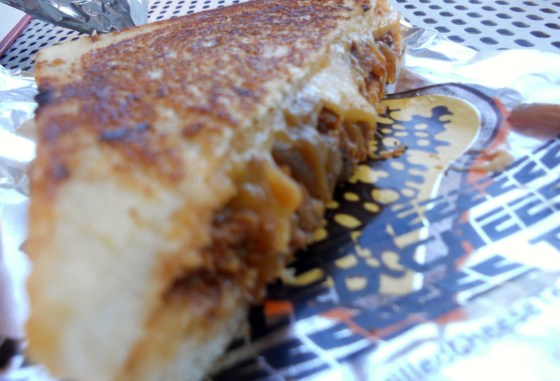 In my opinion the mark of a good grilled cheese sandwich is the bread and how it is cooked. This bread was perfection. Not over cooked but buttery and crisp to offset the cheesy center. This sandwich makes me never want to buy grilled cheese from anywhere else ever again (except Clementine).

I also ordered a half order of tots on the side. I can’t help myself. I am weak before the prospect of tots. 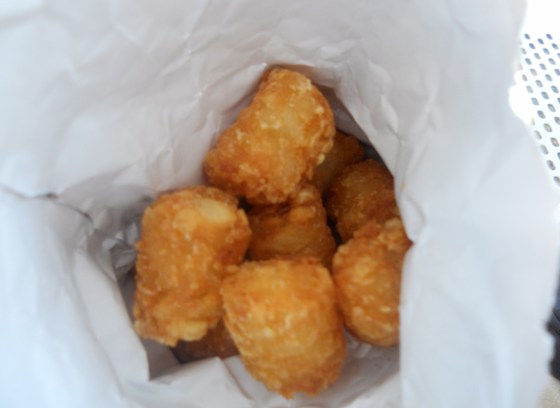 In my opinion, nothing will ever trump Umami’s cheesy tots but these did the trick.

I had a massive cheesy food baby after finishing this meal. In fact my food baby almost put me to sleep in remedies. I fought through it and went on a 4 mile run after school. It should be noted that grilled cheese and tots are not proper fuel for runners. The second half was faster that the first half which is always good but my stomach was kinda queasy the entire time.

And finally: The street artist Banksy has been in LA recently. “Through the Gift Shop”, his documentary, is nominated for an Oscar and is fantastic! I saw it when my brother visited me last summer and thoroughly enjoyed it. You should see it if you haven’t already. While Banksy has been in LA his work has been cropping up in the city. Some was spotted on Sunset but one popped up in Westwood! This is pretty cool because no offense to this corner of the city, but it’s not really all that hip. I’d expect to see Banksy’s work in Hollywood or Echo Park but not Westwood.

Of course, I expect it will be gone shortly so I stopped by this afternoon to snap some photos.

It’s in Westwood on Kinross between Westwood and Glendon (behind Urban Outfitters) but hurry up if you want to see it, I hear they’re trying to paper it over already!

The grilled cheese truck was an awesome truck. Do you have an idea for a great truck? I think a macaroon truck would be pretty sweet (salted caramel from Tavern obvi) or a Susie Cakes truck, OR maybe a bacon truck.

13 thoughts on “the grilled cheese truck”