Really, in theory it seems like a good idea to have finals last for 17 days but in practice its a little sadistic. The week days and weekends are beginning to blend together. I actually have to think about when the weekend was. I have no sense of time anymore.

Catching up from the weekend?

This weekend I set a new 5k PR with Amanda and Kaitlin.

Amanda, Kaitlin and I

If you liked my recap you should check their recaps out! Here is Amanda’s. Here is Kaitlin’s. Photo credit to Kaitlin.

But the big story of the weekend was the weather! Some people in colder climates have told me not to post anymore beautiful pictures of the weather so I will post the adorbs dress I wore on Sunday.

You get the picture? It was niiiiiice out. It literally felt like Summer and it put me in an awesome mood for the final weekend of finals!

I also tried some foodie favorites. When I was with Kaitlin and Amanda we were talking about how something will pop up on blogs and we’ll see it so many times we just can’t stop ourselves from trying it. For me, Kombucha was that thing this week. Kombucha is a fermented tea that has many rumored health benefits. I tried Synergy from Whole Foods.

Some times foodie favs let me down but this didn’t! I had gingerberry flavor which I loved! Ginger might just be my favorite flavor of all time. The drink was fermented in such a way that it tasted carbonated. It also have very few ingredients, all of which were organic. Tasty and delicious. Just what I need, to get hooked on another $3 drink 😉

Today was all about getting in the groove. This is the final push for finals and I want to treat myself and my body well. I had lunch at home and made sure it had plenty of green. 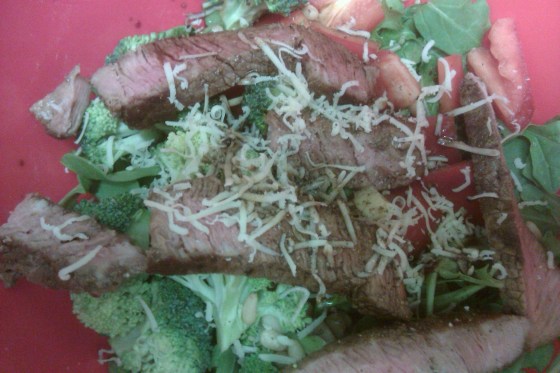 I love this because it looks like Christmas! Can you believe it’s next week? I haven’t done any shopping because of finals. I need to get on that!

Then I went on a wonderful 2 mile run. I tucked along at a nice pace but I was so dehydrated. I’ve done a poor job since the half of hydrating before my runs. In my head I think “oh its only 4 miles” and I leave the water bottle at home or I don’t drink enough before I leave. But today it was 80 and less than one mile in I got “hungry”. The word is in quotes because it was like a phantom hunger. Once I had water I wasn’t actually hunger anymore. So, I am recommitting now to drinking water! I just need to sip on it more during the day and while studying. Water is free at Coffee Bean so this shouldn’t be an issue. I just have to make it a priority.

And now, in honor of the home stretch of finals… here are my favorite procrastination haunts on the web:

Hope you enjoy! What are your favorite digital time wasters?

6 thoughts on “Report from the Front”

Error: Twitter did not respond. Please wait a few minutes and refresh this page.