This week marks that start of my formal running training. Actually, I’m not doing much different than I usually do. Running 4.1 miles at least 3 times a week with yoga in between runs and triceps dips and light weight training on my “off days”. I want to also introduce some interval training. I had my first run yesterday and it was great. I think that knowing I was going to run a race made me more motivated. I was running with purpose. However, my left hip didn’t like it too much. I really have to up my stretching before and after runs.

Tonight I did power yoga which was intense. I sweat a lot and the  6 pm class was packed. The guy next to me was sweating before class started and was rocking a yoga headband. That’s a deal breaker. As I said, class was intense and sweaty and I expect to be majorly sore tomorrow.

After yoga I caught up with a taco truck I saw on my way into yoga. How awesome that it was still there, right? I was kinda thinking about it all through class. I know, I have a sick obsession with food trucks. I ate a taco so quickly that I didn’t get a picture. When I got home I knew I should eat something else so I had this piece of Ezekiel bread with hummus, arugula, and sun dried tomatoes. 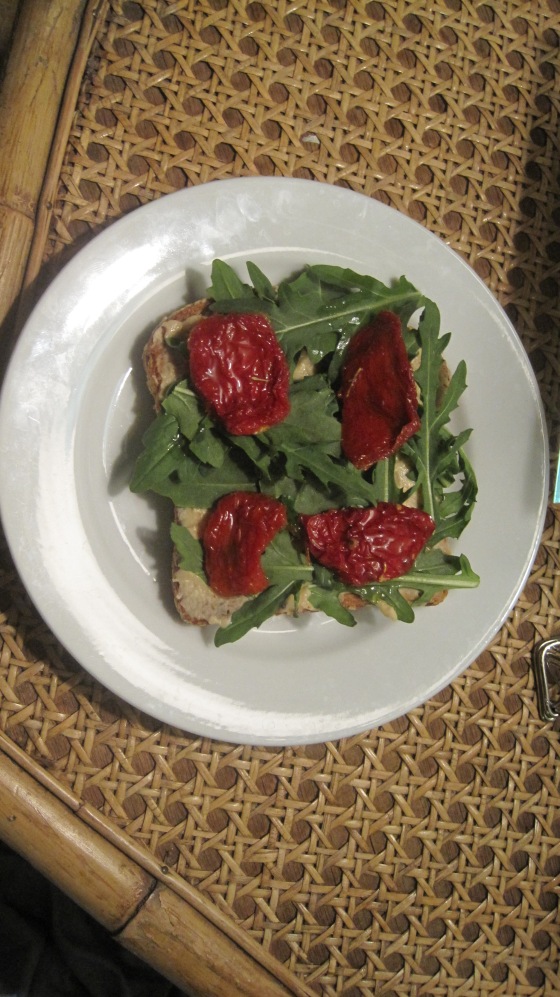 This was so good! Definitely going to have this again soon.

And one more thing before I go. Last Sunday my balcony was infiltrated by a squirrel.  Izzy took this invasion very personally. She became fixated.

I have since removed the pumpkin but she remains obsessed. Literally, she has been stalking the screen and staring at the place where the pumpkin was for hours. Poor thing. Goodnight, bloggies!